A self-professed Melbourne ‘raconteur’ and his Creative partner decorated their home using curated vignettes of collected objects, curios and Melbourne Art that spin a tale of mischievous wonderment.

This Spanish revival style home was designed back in 1926 by architects Leighton Irwin & Roy Stevenson.

This architectural style became quite the rage during the interwar years 1915-39 and is characterised by arched colonnades, pastel-hued stucco or swirly rendered exteriors, terracotta half-pipe roof tiles,  scrolled ironwork and obligatory palm trees. It was a time before television when those who had travelled wanted to emulate the glamourous homes of the Hollywood screen stars. And it wasn’t just houses that were built. The aptly named ‘Beverly Hills Mansion Apartments’ built into the hillside on Alexandra Avenue in South Yarra and its neighbouring blocks are fabulous examples.

The restoration of this completely derelict home provided yet another thrilling challenge for these ‘serial renovators’. Join us as we discover the private objects inside this luxurious Melbourne ‘hacienda’.

From the raised entry, a swathe of solid oak chevron parquetry, typical of the Spanish Revival style, is given an oversized ‘twist’. Above are the restored, and highly decorative ceiling mouldings. Two strong statements, above and below, like a hardback cover between which the interior ‘story’ is ‘bound’.

Huge black panelled double-doors act like giant book ends holding the ‘chapter’ of each room and leading you on to the next.

From the entry landing, we step down to a decadently wide corridor that runs the full width of the house passing under an internal multi-arched loggia supporting the upstairs landing. An authentic antler and fur chair and white-framed ‘cubist’ artwork titled ‘Balancing Act’ by John Robinson provide clues to the story ahead.

Directly ahead is the formal living room with views out to the pool and Robert Boyle designed garden. A large ‘culled’ zebra hide with a black felt backing decorates the floor in front of an original early 19th century bent cold-steel and leather rocking chair. We learn that the zebra was a Burchell from South Africa. Apparently these zebras are the only sub-species of zebra which may be legally culled for human consumption. 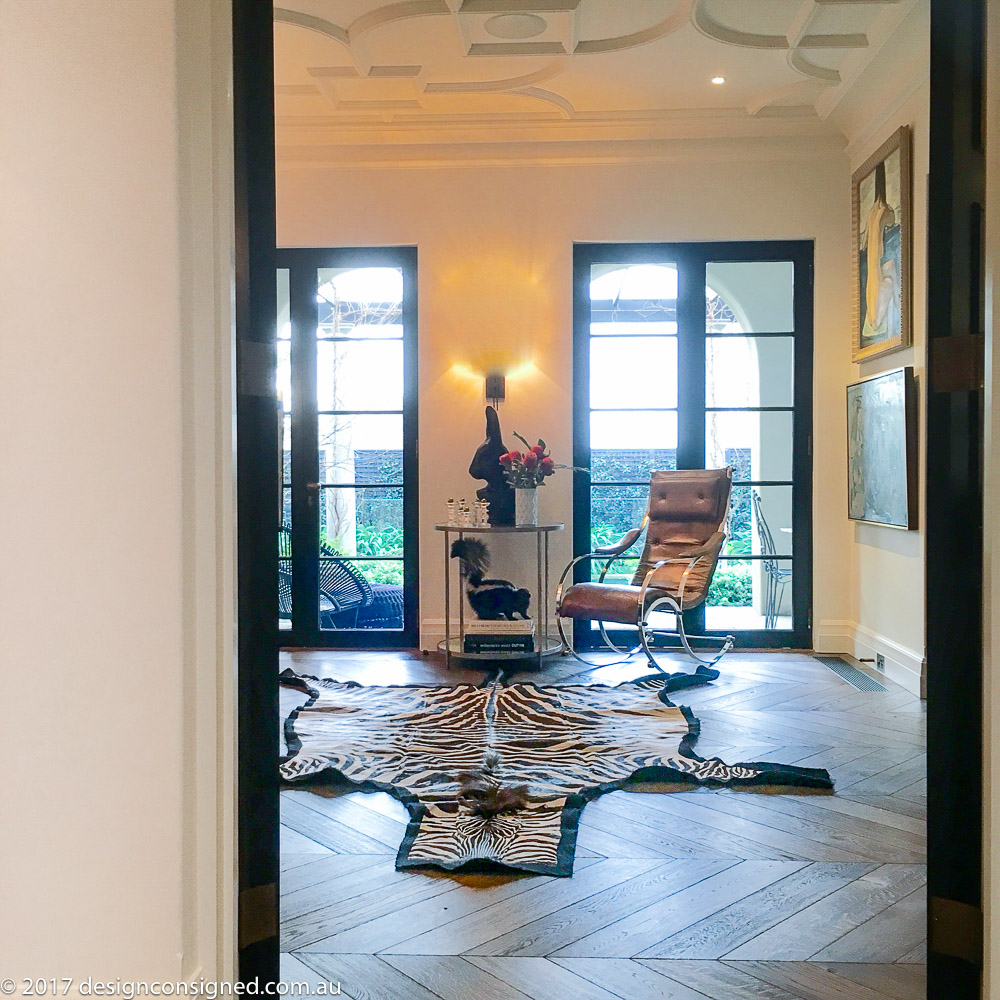 On a circular side table are six scandinavian glass ‘festivo’ candle holders designed in 1967 by Finnish designer Timo Sarpaneva (1926-2006) for Iitala. The glass is  deliberately rough-blown to resemble arctic ice.

‘Fiver’, a black cast resin bunny by Kate McIntyre and Brad Huntzinger of Olystudio.com San Francisco, plus a taxidermied skunk survey the scene.

Resting on the enormous fireplace mantel is a painting by Mike Nicholls, one of the original artists at ROAR, Melbourne’s ‘post punk’ co-operative gallery which opened at 115 Brunswick Street in 1982. “There was nothing but tumbleweeds coming down Brunswick Street back then” says artist Mark Schaller, founder of ROAR. Not long after, Henry Maas opened The Black Cat café, then came Marios in 1986 and slowly Brunswick Street, as we know it today, came to be.

At the far end of the room is the library, with a full length window looking out to the front garden.

The pink fleshy figures in the artwork by Tony Woods tie with the fashionable musk pink of the comfortable velvet armchair purchased from Kerry O’ Connors (now closed) Los Angeles ‘trove’ on High Street, Acquisitions where you could shop his container loads sourced from the mansions of Beverley Hills.

Through a column flanked archway is the dining area illuminated by a BCAA feature light by Melbourne designer Christopher Boots. It hovers like a beautiful illuminated iced tipped winter branch above the English c1800s Jacobean table, a treasured family heirloom. An ongoing collection of gilded ‘sunburst’ mirrors adorn the wall.

A Knole gold vintage sofa spotted and rescued by the owners at the auction of a nearby derelict Victorian mansion fits snugly at the end of the corridor.

Crossing the hallway we glimpse the guest powder room. The goldfish wallpaper by Osborne & Little from Seneca Australia, is perfection as is the jewel-like tap-ware and custom made Carrara marble vanity.

Ah ha ! Looks like we’ve stumbled upon ‘the raconteurs retreat’. 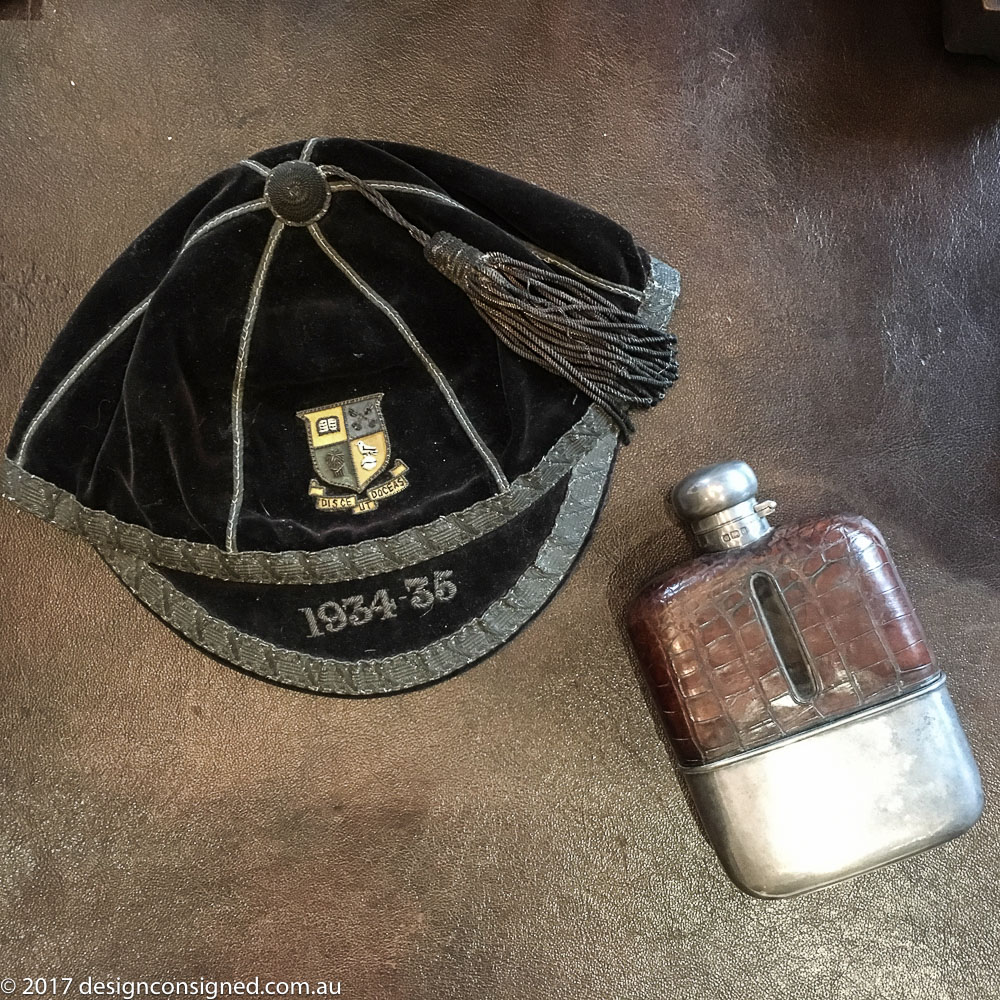 There is a consistent design narrative throughout this home which connects back to the owner’s joie de vivre. Curious objects and authentic semi abstract  Melbourne art come together to create a design story of intrigue.

Unlike any other, this interior can be described as crisp traditional with an eclectic twist. It does not draw reference from any specific time or place, it tells its own unique Melbourne style story.

Together, this Melbourne duo love to collect fascinating art and objects, which are often Birthday gifts to one another. These things also happen to work perfectly in this historic house. No expensive stylists or Interior designers are required when you have a great sense of style and a curated collection gathered over the years.

*click on the highlighted links to source actual or similar objects

. ➕ www Design Consigned com au - Is where all t